Curious what makes someone shine among their peers? The Stars Behind the Stars with astrologer Lauren Ash is your behind the scenes look at the birth charts of your favorite celebrities.

When the judges of The X Factor grouped Harry Styles with four other singers to form One Direction in 2010; nobody could have anticipated both the group and Harry Styles' eventual rise to fame. After spending years breaking records with One Direction – he’s won acclaim and recognition for his songwriting abilities, solo music career, and work on this silver screen. It’s left us wondering – is there anything Harry Styles can’t do?

Here are astrological signatures that highlight Harry Styles’ rise beyond his boy band beginnings and into superstardom.

When a stellium occurs within a natal chart it means the personality of that person is heavily influenced by that sign. In this case – Harry Styles' birth chart features an Aqaurius stellium containing his Sun, Mercury, Venus, and Mars in his 4H.

Aquarius Sun in the 4H

Your Sun Sign shows the truth behind what your heart desires really is, as well as how you see yourself. Celebrities with their Sun in Aquarius are often seen as socially conscious, free-spirited, and trendy. With Aquarius in the 4H there is a desire to blend their intellectual and artistic skills to connect with others. Creative expression through art or music makes it easier for these normally private people to showcase their vulnerable side.

Aquarius Mercury in the 4H

Mercury in the 4H is a sign of someone who feels the most secure when they are allowed to freely express their ideas. These people feel a deep connection to their ideas and prefer to indulge their creative side behind closed doors. With Mercury ruling written communication and spoken words it’s not unusual to find songwriters with this placement. With Aquarius in the 4H – this indicates a desire to keep close personal relationships private. For Harry Styles birth chart – this may translate into a need to turn his personal space into a sanctuary for his creative process.

Aquarius Venus in the 4H

Venus is the planet of romance and influences all things beauty, and pleasure (especially shared with others). These individuals often find themselves attracting unusual friendships or opportunities due to their willingness to try anything once. This may explain why Harry Styles has been able to navigate an unconventional rise to fame while breaking records nearly every year. Assuming Harry has a Libra rising, this would make his 4H Aquarius Venus his chart ruler. In the 4H – this indicates a desire for an unconventional romance. In relationships they can read as aloof and emotionally detached, but make no mistake that when Aquarius Venus’ fall – they fall hard.

Harry Styles – Adore You Lyrics
BOOKMARK THIS: Top 3 Ways to Look for Love Based on Your Birth Chart

Aquarius Mars in the 4H

Under its modern ruler Saturn – Aquarius is both blessed and challenged with a hard work ethic and sharp mind. Despite how effortless Aquarians make life seem – success doesn’t always come easy to Saturn ruled placements. In the 4H – this means Harry Styles is the type of creative who keeps his projects private until he deems them complete. Only a select few trusted individuals are given access to the behind the scenes workings of 4H placements and with his Mars in Aquarius – Harry Styles birth chart highlights why admires other rulebreakers who changed the music industry before him. They also have a reputation for being stubborn in arguments and not the quickest to forgive. The Fixed energy of Aquarius can have those with this placement struggling to apologize or admit they were wrong – even if they want to!

Harry Styles – To Be So Lonely Lyrics

‍There’s no denying the major Aquarius influence on Harry Styles birth chart but don’t let the cool guy act fool you! Harry Styles is hiding some major Libra influence in two of his big three placements.

Libra Moon in the 12H: Privacy, Seclusion, and Secrets

Harry Styles has 12H Libra Moon trine his 4H stellium: making him an incredibly private person despite being a public figure. Your moon sign unlocks the secrets behind your intuition, emotions, and heavily influences your interpersonal relationships. Celebrities with their moon in the 12H often keep parts of their personality or personal life hidden to protect their peace. 12H Moon placements can easily become overwhelmed by their emotions and need long periods of alone time for self-care.

While there is no confirmed time of birth for Harry Styles – astrologers agree his ascendant is most likely in Libra. And your ascendant – sitting on the 1H of self-expression and identity – determines the energy of both your outward personality and your birth chart as a whole. There’s no denying the Venusian influence in Harry’s moon and ascendant give him an effortless flirting style and charm that drives fans wild.

Midheaven in Leo: Born to Perform

Your Midheaven is one of four chart points that represents your highest aspirations, reputation, and your role in society. Harry Styles has been earmarked as a trendsetter and star since his One Direction days for his rockstar vibes. This is likely due to his Sun Opposition MC, Venus Opposition MC, and Mars Opposition MC. For Harry Styles – this opposition is happening in the signs of Aquarius the Rebel and Leo the Creative. Celebrities with these placements are more concerned with their inner personal world and are less influenced by others' ideals.

Harry Styles has carved out a unique spot for himself in the music industry. In other words? He’s not trying to be cool – he just is!

♒ Ready to learn more? Check out the latest from The Rising – 3 Traits Your Zodiac Sign Needs in a Soulmate 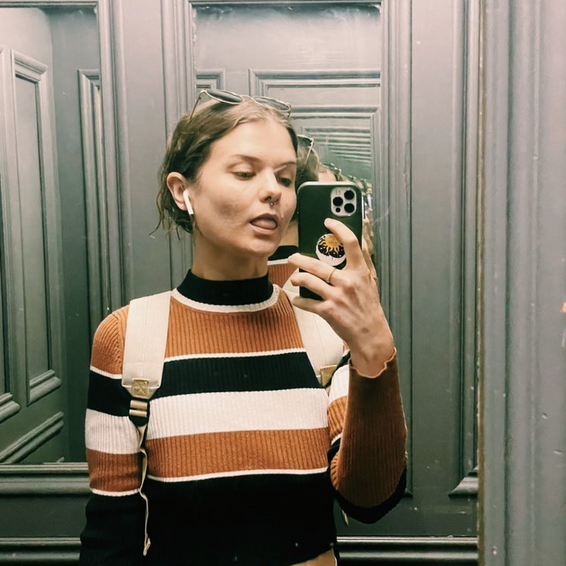 Lauren Ash is a professional astrologer and founder of Lunar and Lilac Astrology. Follow her on TikTok and Instagram. You can read her work on The Rising or ask her a question on Hey Hero.