Taylor Swift's Celebrity Birth Chart: The Key to Her Success

Taylor Swift's Celebrity Birth Chart: The Key to Her Success

Few individuals embody the balance of creativity and business prowess to the degree of multi-hyphenate icon Taylor Swift. Yes, she’s an 11-time winner and 41-time Grammy nominee, Time 100 Most Influential People recipient and 2019 American Music Awards Artist of the Decade honoree… But you don’t need to be a fan (although come on, she rocks!) to recognize her proficiency for writing music both deeply personal and universally relatable. Her ability to make teenage girls everywhere feel understood post-breakup while selling out arena tours and smashing Billboard records is no easy feat, so how does she make it look effortless.

Here are astrological signatures that highlight her contribution to the world:

Every 7-8 years Saturn marks a major transit and milestone. Saturn in Capricorn made a karmic agreement to be the boss of her own destiny.

At age 14, her first Saturn opposition, she signed a music publishing deal with Sony/ATV, the youngest signee in the company‘s history.

At age 20, during her following Saturn Square, she won Grammy album of the year for “Fearless“. Her Saturn return was off to a rocky start with the Kim Kardashian feud in 2016, which she catalyzed into her album “Reputation“ released in 2017. She famously said, “If you can find something real in spite of a bad reputation, isn’t that what matters the most to you?” Her Saturn return re-oriented her priorities and she rose from the ashes of a tumultuous year and a half, timestamping her most serious relationship to date with actor Joe Alywin.

Moon conjunct Jupiter in Cancer in the 8th house

The magnitude of her emotional body is the driving force of her chart and personality. Jupiter is the planet of expansion and joy. It is the largest planet in the solar system, and enlarges anything it touches in a birth chart! In this case, it’s blending with her emotional body, making every emotion all-consuming. We hear this throughout her discography, including: “Sorry, I can't see facts through all of my fury” – “Happiness” from “Evermore”

When she is in love, she’s all in, but when she’s heartbroken, it eclipses everything else… evident in her gut-wrenching, all-consuming ballads and scorching diss tracks.

Planets that fall into the 8th house prefer to be private. Cancer rules home life, and this is where her emotional body and her source of joy dwell. It explains why she is so serious about maintaining her privacy when it comes to her home and relationships. "I could build a castle out of all the bricks they threw at me" – "New Romantics" from "1989"

Stellium in Capricorn, opposite Moon + Jupiter in Cancer

A stellium is three or more planets in the same sign or house. It is a concentration of energy and signature of a birth chart.

60% of her placements fall within the opposition of Cancer and Capricorn. She has mastered the ability to capitalize (Capricorn) off her emotional body (Cancer) with relatable music.

An opposition is a symbiotic relationship. On one hand she’s deeply intuitive and channels her sensitivity into her work, creating poignant music that resonates with millions of people. Her emotional nature informs her art, but her brave vulnerability exposes her to the harsh scrutiny of the outside world and opens up her most intimate moments for commentary and speculation.

With Chiron in the mix, her wounding has been around healthy emotional boundaries and not losing herself in relationships. "You call me up again just to break me like a promise / So casually cruel in the name of being honest" – "All Too Well" from "Red"

Mercury in Capricorn in the 2nd house

Capricorn rules four out of the five planets populating her second house of personal finances, contributing to her massive success from an early age.

You’ve got to be your own boss when your mental body is ruled by Capricorn, it’s the shot caller! For instance, when Scooter Braun bought the rights to her early discography, it felt like her autonomy was stripped away. That was a gut-punch to every woman who has felt undermined or powerless at the hands of patriarchy, but she handled it with vulnerability and razor sharp business sense. She quickly turned around and re-recorded all of her greatest hits to regain autonomy of her earlier work. Capricorn will not settle for anything less than the best, and if their independence and success is threatened, they will do anything to regain it.

Her mental body is influenced by the planets of creativity, discipline, and rebellion. Whether or not you like her music, you cannot dispute she is a once in a generation talent. Hit songs pour out of her, with a Neptune conjunction streamlining her creative process and a Saturnian influence offering the discipline required to follow through. Uranus shows up in the 2nd house showing us where she feels inclined to do things differently and break the rules. In her 2nd house of security and finance, she has her own label and uses that Capricorn business sense to make sure she is fully in control of her own music and career.

Sun in Sagittarius in the 1st house

The house of the Sun sign becomes the theme of the entire chart. The first house rules identity, self-expression, and conviction. These individuals must blaze their own path and subsequently may come under fire for their independence and ingenuity. The firepower of the 1st house gives them the fortitude and resilience required to stay true to course. Taylor has navigated intense public scrutiny but her sense of self has always been clear. Even experimenting between genres throughout her discography, Taylor is Taylor!

North node in Aquarius in the 3rd house

The north node is a shortcut to true soul fulfillment. The catch is, it requires discipline to activate and can feel uncomfortable in early life. Aquarius is all about self liberation from the status quo and outside expectations. The south node, the natural opposite sitting 180° apart, is the comfort zone. The mastery but also growth edge within the chart. Her south node is in Leo. She is a natural born performer, but by stepping into her north node and liberating herself from the expectations of others, she has been able to helm her own destiny. 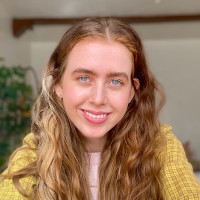 Ocean Pleasant is a Professional Astrologer and Cosmic Coach distilling the ancient wisdom of the stars into meaningful content and conversations for her clients, online community, and brand partnerships with Target, Mantra Magazine, and others. Her platform is the culmination of a lifetime of celestial fascination and study, paired with a background in business and media recognized by Forbes 30 under 30, The Thiel Fellowship, TEDx, and others. @oceanpleasant on TikTok, and @witchykid on Instagram.